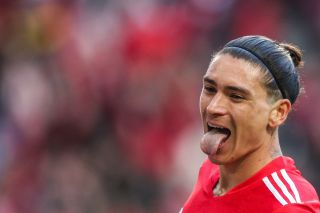 Liverpool have emerged as the frontrunners to sign Benfica striker Darwin Nunez.

The 22-year-old Uruguay international was listed as a transfer target this summer, but it sounds like Liverpool have won the race to sign the striker.

It was recently reported that United had put Nunez on the backburner to focus on a move for Barcelona midfielder Frenkie de Jong.

According to talkSPORT reporter Alex Cook, Liverpool believe they are firmly in the driving seat for Nunez and expect him to sign. Futhermore, United are exploring other striker targets while still trying to seal a deal for De Jong.

#LFC now believe they are firmly in the driving seat for Nunez and expect him to sign. #MUFC exploring other striker targets while still trying to get De Jong deal over the line. Already some big tests for the new regime early in their reign. https://t.co/PIk62Kf5Pi

That will raise questions over whether United missed out because they were asleep at the wheel, or do they have something else up their sleeve.

Losing out on a transfer target to your arch rivals never feels good.

Nunez is an incredibly talented prospect and it has been reported for some time that he only wanted to join a team that had secured Champions League qualification.

Darwin Nunez and Erling Haaland when we end up with Anthony Martial. 😂 #MUFC pic.twitter.com/ZvcyoTL5Zi

I’m sure United tried to sell him Erik ten Hag’s project, but right now we need to focus on players that want to come to Old Trafford.

To make matters worse, Nunez looks set to become the second striker to turn down a move to United this summer. The other will sign for Manchester City…

Hopefully John Murtough, Darren Fletcher and Ten Hag have a Plan B – or should we say Plan C at this point? The Dutchman can’t take the blame when this should’ve all been prepared in advance.