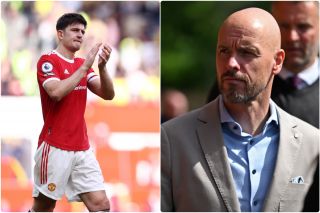 There are a lot of questions about how Harry Maguire will fit into Erik ten Hag’s plans next season and beyond.

With talk of Maguire losing the captain’s armband, the England international could also lose his guaranteed place in the team as Ten Hag looks to make changes on the pitch in order to give the team a clear identify and playing style.

Some United fans think it would be a wise idea to cash in on Maguire, but the manager can’t sell everyone who underperformed last season because he wouldn’t be left with enough players to field a team. That is why Ten Hag might give Maguire the benefit of doubt next season – maybe in a back-three if the club signs a new centre-back?

For England, he doesn’t carry the burden of captaincy and appears to perform at a higher standard. Gareth Southgate has seen the benefit of deploying the United skipper as part of a back-three playing alongside John Stones and Kyle Walker.

Speaking to talkSPORT, Dutch football journalist Marcel van der Kraan gave a damning assessment of Maguire when explaining how Ten Hag likes his team to defend: “Jurrein Timber will be a really important player for Erik ten Hag becasue he can change the build-up from the back. He can change the style.

“If you look at when Rio Ferdinand joined, he was a footballing central defender. Ten Hag will never play with two Harry Maguires. He will want to have a real footballing player in central defence to start the build-up.

“Ten Hag will want to play on the half of the opponent, just like Pep Guardiola. He’s a massive fan of Pep. I would almost think that there will be two teams with the same playing style in Manchester next season.”

For starters, and perhaps thankfully, it would be impossible to field two Maguires.

Van der Kraan suggests Timber would be a shrewd signing for United.

At 20, Timber would be an excellent addition due to his versatility and United could do with a utility man who can cover a number of defensive positions.

Let us know in the comments section below if you think Maguire can play a big role under Ten Hag? I’d certainly like to see him surprise a few people next season.