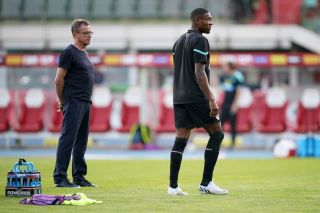 Ralf Rangnick’s six-month stint in charge of Manchester United couldn’t have gone much worse than it actually did. The highly regarded German coach accepted an interim role at the end of last year when Ole Gunnar Solskjaer was dismissed.

Initially, results improved and Rangnick was well-spoken in the press, which won supporters over and the planned two-year consultancy role was thought to be one of the reasons he accepted the job.

Last month, after registering the worst win percentage out of any United manager in the Premier League era, it was announced that Rangnick’s advisory role had been scrapped.

Since then, he has overseen two games in charge of the Austria national team and their captain, David Alaba, has come to his defence and hailed him as a ‘world-class’ coach.

“He has been really good,” Alaba told The Athletic. “You can see we have a really good plan and you can see it works for us on the pitch. He doesn’t want us to let the opponents breathe air. It is good for us.

“I have known Ralf since I was 18 years old and he is a world-class coach. What he did in the past is something special and now I am seeing it close up. He showed what he can do at Leipzig, Salzburg and Hoffenheim.

“He didn’t have a lot of time in Manchester. He has a really good plan and knows a lot about football.”

SN’s verdict…
The final few weeks of the Rangnick era at United were ugly to watch from the outside, with players visibly upset and clearly not buying into the manager’s ideas.

There is an argument to be made that Rangnick’s interim role undermined his authority and that players were never going to give it their all when they knew that a new manager was on the horizon.

No one really knows what exactly caused the dramatic nose dive under Rangnick but evidently, as his first few weeks in Austria suggest, it seems like his experience at Old Trafford could have been a one-off.