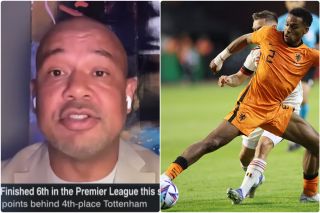 Erik ten Hag has left Ajax to take the reins at Old Trafford ahead of the 2022/23 season. The club will need to back the new manager in the transfer market in order to rebuild the squad, with several players leaving this summer when their contracts expire, and we’ve been heavily linked with the versatile defender.

The 20-year-old was part of Ten Hag’s Eredivisie-winning side this season and it goes without saying that he would be an upgrade on most of the defenders already at the club.

Providing his thoughts on the links, Vink suggested that Timber would be a brilliant signing for United.

“Maybe he can play alongside Harry Maguire, this guy is ice cold,” Vink told ESPN FC.

“For me, it’s somebody who could play in the Premier League but also could help Man United from the back football wise.”