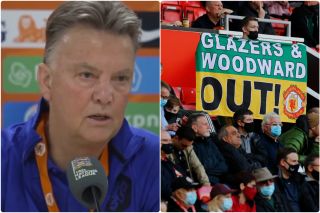 Louis van Gaal has suggested Ed Woodward’s departure earlier this year could present Erik ten Hag with the opportunity to be a success at Old Trafford.

It’s clear from Van Gaal’s comments since getting sacked by Manchester United that he doesn’t blame himself for things not quite working out at Old Trafford.

His management was questionable, the football was sleep inducing, but I will always side with the football man over a banker like Ed Woodward.

Moreover, the Dutchman’s criticisms of United down the years have not been wide off the mark. He’s entitled to his opinion like every other man.

At a press conference as Netherlands manager, Van Gaal took aim at former executive vice-chairman Ed Woodward ahead of his side’s Nations League game against Wales.

Louis van Gaal on Erik ten Hag: "There is now a new leadership. It was Woodward now it's Richard Arnold, and that can make the difference — he has a lot of confidence, so who am I to say something about that?" #mulive [@TheEuropeanLad] pic.twitter.com/hBWDKVf1XW

Ten Hag told reporters, as quoted by The Independent: “There is now a new leadership.

“It was Woodward and now it is Richard Arnold and that can make the difference. So we have to wait and see.

“He (Ten Hag) has a lot of confidence. So who am I to say something about that?”

United is a commercially driven football club with owners who don’t care about the fans.

While we’re sure Van Gaal wishes Ten Hag well at United, it is early days for Richard Arnold and he will soon be questioned if things don’t improve.

It’s clear to see from the video above that Woodward won’t be getting a Christmas card from Van Gaal.