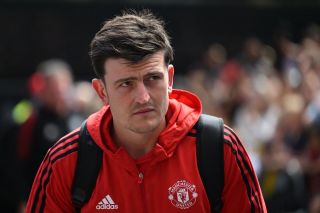 Speaking to CaughtOffside, Chadwick admitted he could see Ten Hag giving the captaincy to someone else – in order to allow Maguire focus on his football again. He thinks that it will disappoint Maguire, but he liked the idea of the players choosing a new captain.

“From what Erik ten Hag said at his first press conference it didn’t sound like he’d keep Harry Maguire as captain,” Chadwick said. “It seems risky, but it could also be good to ley the players decide.

“From last season, it doesn’t look like there are too many strong canddiates, maybe just Cristiano Ronaldo and David de Gea. I’d be quite surprised if Maguire stays as captain, and if the rumours are true I’d also be quite surprised if the players were given the power to decide, given the factions there and the lack of togetherness in the squad that we saw last season.

“De Gea would probably be the overwhelming favourite, but if the players pick someone Ten Hag’s not totally convinced by, I’m not sure that would be the best situation. Either way, I’d bet that it won’t be Harry Maguire leading them out next season.

“I think Harry would be disappointed to relinquish the captain’s armband, it’s such a huge honour to be the captain of a club like Man United. At the same time, I think it would free him up a bit to get back to his best.

“Last season was a disappointing one for him, he had a lot of stick, but we’ve seen in the past that he can be a top Premier League centre-half. Maybe taking that pressure away would let him concentrate on his performances.

“It’s understandable that Ole Gunnar Solskjaer chose him to be captain, but now you’d have to say his form has gone downhill since then. It’s disappointing, but I think it could be the best decision for everyone moving into next season.

“With where the club is at right now, I don’t think it would necessarily be a bad thing to make a new signing captain. It would have to be a real leader who’s done it elsewhere, who can come in straight away and take on the responsibility of captaining a club like Manchester United.

“Given how the season finished, I think if there’s a strong candidate out there who could come in and become captain, I don’t think that would be a bad idea at all. You can see this squad is maybe a bit lacking in leaders, so someone else could come in and help raise standards, and maybe bring this group of players closer together.”

There is no denying that Harry Maguire has had an awful year. While he wouldn’t be the only player to receive worthy criticism for his performances in a United shirt, there has been many reports about the captain’s armband being passed on to one of his current team-mates.

As things stand, De Gea is the favourite to become club captain for next season.

One source previously told Stretty News that Ten Hag will look to get to the bottom of Maguire’s issue. It is understood that the former Ajax manager is assessing the situation and doesn’t believe the centre-back has the same problems when playing for England.

Of course, Maguire is not the captain of Gareth Southgate’s England side, who are in Nations League action tonight against Germany.