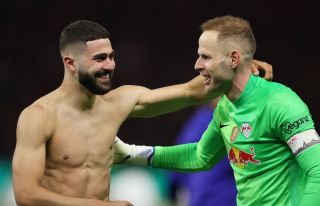 Manchester United are one of three Premier League clubs involved in a battle to sign RB Leipzig defender Josko Gvardiol.

That is according to the Daily Mail, who claim Chelsea have made the centre-back their top defensive target for the summer – but the Blues will face competition from Tottenham Hotspur and Manchester United for the Croatian’s signature.

The Red Devils have reportedly made ‘tentative enquires’ about the player – but they won’t have Ralf Rangnick’s help in conducting a deal, despite his formidable links to the Red Bull franchise.

Leipzig aren’t keen to lose a player rated a €30 million and they only signed Gvardiol last summer from Dinamo Zagreb. The 20-year-old started 28 Bundesliga games this season but made a total of 46 appearances across all competitions.

Like Chelsea and Tottenham, United are also in the market for a central defender and have been linked with a host of names.

Gvardiol has four years left on his current contract at RB Leipzig, but it sounds like he could still be a cheaper option that some of United’s other targets.