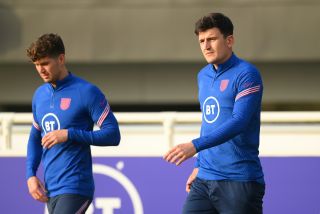 Harry Maguire’s England team-mate John Stones has come out in his defence, stating that some of the criticism of the Manchester United skipper has been harsh.

It was a tough season for everyone at United – but especially Maguire, along with being booed by England fans and targeted by a hoax bomb threat at his family home.

Stones has stressed that he enjoys playing alongside Maguire for the Three Lions.

“I think some of the criticism that I’ve seen personally and over this season has been harsh,” Stones said, as per The Mirror.

“I don’t want to get into that but I think how he’s conducted himself on and off the pitch, he should be extremely proud of that and, all I can say is, I enjoy playing with Harry and I hope that we can do for many more years to come.

“I used to play against Harry as a kid and I knew his quality then. I think he was the age group older than me but I got the opportunity to play against them and it took quite a few years to be able to play with him here.

“So I hope we can keep playing together and building this partnership, whoever it may be, in a back three or back four.”