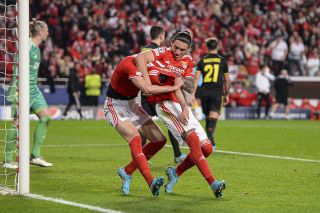 Darwin Nunez’s phenomenal rise to prominence this season has seen the Uruguayan linked to a number of top clubs this summer.

The Telegraph has listed the Benfica striker as the number one player to dominate the transfer window this summer and claim a move to Spain is currently seen as the most likely outcome. Nunez was always likely to become Europe’s most wanted striker once Erling Haaland secured his move to Man City.

It is also noted that the 22-year-old is understood to be determined to join a Champions League club, which could be bad news for United.

With Luis Suarez and Edinson Cavani being the best Uruguayan strikers of their generation, United-linked Nunez will be aiming to dominate the goalscoring charts over the coming years.

Nunez has been strongly linked with a move to Atletico Madrid, so he could be playing his football under Diego Simeone next season.

Cavani has announced that he will be leaving United this summer, while Diego Forlan has urged the Red Devils to sign Nunez as they look for a versatile goalscorer in the transfer market.

In 2020, when Nunez was at Almeria in Spain’s second tier, Suarez told Barcelona officials to sign him.

But he’s never looked back since moving to Portugal.