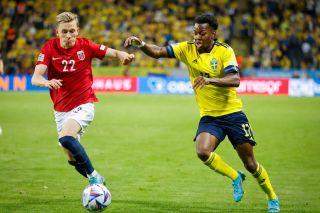 In doing so, the 20-year-old admits that former Manchester United interim manager Ralf Rangnick used him on his less preferred flank, adding that he can play even better on the left.

Elanga had his breakthrough year at Old Trafford and he owes a lot to Rangnick, for having so much faith in him.

The German not only gave the young Swede his debut, but he was made a first-team regular after replacing Marcus Rashford in the starting line-up.

He made 21 appearances in the Premier League, scoring two goals and registering two assists. Now, Elanga is representing Sweden at senior level and recently scored his first international goal against Norway.

The young attacker has been used predominately on the right wing by Rangnick, but he claims that he is better on the left, where he’s played for Sweden.

Speaking to Fotbollskanalen, Elanga said: “It suits me very well.

“With United I play a lot on the right but now I get the chance to play on the left, that is my favourite position.

“I can do more there. I can go both into the pitch and on the outside.”

It’s important to point out that Elanga isn’t complaining about his role at United last season.

I’m sure he is delighted with the minutes he got as United ranked second in the Premier League charts for most minutes given to teenage players.

Let us know if you think Elanga will get as many minutes under Erik ten Hag next season?