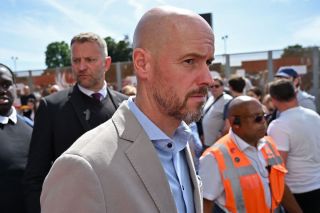 Some of you may have seen Erik ten Hag’s newly launched Twitter account on your social media feeds.

Although it’s pretty inactive (nothing to see here), Ten Hag’s account (@eriktenhag) was launched in May 2022.

Those who noticed it were left in the dark by his profile being locked and without any information.

However, Stretty News understands Ten Hag — with the help of his representatives — has secured the account so there’s the option to use it in the future, and this also allows them and Twitter to address fake accounts.

While there’s the option to use it in the future, I understand it’s been set up to address fake accounts. Don’t expect him to be leaking line-ups. #mufc

Now that we have some clarity over why the account was launched, I wonder if Ten Hag will secretly use the account to keep an eye on his players. At least he won’t need to worry about Paul Pogba and Jesse Lingard.

We suspect that Ten Hag won’t be encouraged to use the platform unless he wishes to. He didn’t need to tweet about his time at Ajax and I reckon he’ll be too busy to leak any team news in a bid to gain followers.