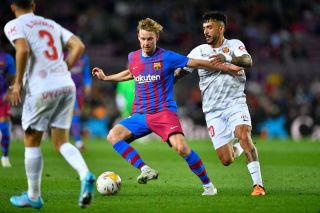 Manchester United are the only club among those interested in signing Frenkie de Jong to be willing to pay the money Barcelona want in exchange for the talented midfielder.

That is according to Spanish publication Sport, who claim there has been negotiations between Barcelona and United over a deal worth €80 million, which could prove to be a stumbling block for clubs like Man City, Paris Saint-Germain and Bayern Munich.

Unlike United, neither of those clubs are desperately looking to build a new midfield. That’s why they might be less willing to fork out big money on the Netherlands international.

The report stresses that United are nearing an agreement with the La Liga giants and are ready to pay what his present club want at the moment.

De Jong worked with Ten Hag during his time at Ajax, where he became one of Europe’s best midfielders. The pair had a brilliant working relationship during Ajax’s run to the Champions League semi-finals in 2018/19.

Ten Hag will hope he can bring De Jong to Old Trafford to restart their journey together.

It’s certainly a signing that excites us but I don’t want to see United being played along in the transfer window. This will turn out to be one big waste of time if De Jong stays at Barcelona or signs for another club.

Let us know in the comments section if you think United will be successful in their quest to sign De Jong?