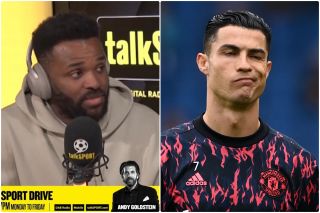 It is believed that new manager Erik ten Hag will allow the dressing room to choose the next captain, with a vote deciding who the team’s leader is going to be. That’s according to The Sun, who say that David de Gea has emerged as the favourite to take the armband from Harry Maguire.

Maguire became club captain under Ole Gunnar Solskjaer but his form has worsened and there is a genuine fear that he will be removed of captaincy responsibilities next season. And it remains to be seen whether the England international can find a way into Ten Hag’s plans moving forward.

Many fans would argue the writing has been on the wall for Maguire.

Footballer turned talkSPORT presenter, Darren Bent, has suggested that De Gea should be the next captain at United — instead of Cristiano Ronaldo.

Bent said (via Manchester Evening News): “My thing with Ronaldo is, we know he’s a leader, but he tried to lead this season and not many of the players followed him. Some of them went the other way.

“None of them improved, none of them wanted to follow the example that he set and he’s one of the greats, but there were times when people didn’t pass the ball to him and he’d turn his back on them and throw his arms up in the air. That’s not a captain.

“He was a captain this season without having the armband. For me, David de Gea would be my captain.”

You’d struggle to not laugh at Bent’s comments when you look at Ronaldo’s record as captain for Portugal. Fernando Santos recently made it clear how important it’s been to have the best player in the world as their captain.

Bent speaks as if Ronaldo was captain this season – but that wasn’t the case.

A lot of United’s problems in the dressing room this season stemmed from the fact so many players gave up because they knew their contracts would be expiring in the summer. It was clear that a number of them didn’t care about qualifying for the Champions League and Ten Hag can’t let that happen again.

Let us know what you think of Bent’s assessment in the comment section below.