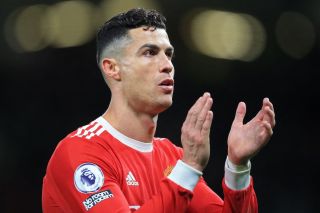 I don’t want to say it has been a memorable season for Cristiano Ronaldo because, apart from returning to Manchester United in August, there wasn’t really anything to celebrate.

Ronaldo will stay at Old Trafford for another season at least and he is already planning to win trophies under Erik ten Hag. United fans should hope so because we haven’t seen the team lift a trophy in over five years.

On an individual note, Ronaldo scored 24 goals for United and won both the Sir Matt Busby Player of the Year and Goal of the Season awards for 2021/22.

Both accolades were voted by the fans, so Ronaldo took a moment to say thanks on Instagram.

His message of appreciation read, as per ManUtd.com: “Thanks to all the fans who voted for me. I couldn’t be more proud of winning the Sir Matt Busby Award in my comeback year to Old Trafford and to the Premier League.

“This award goes to all the supporters who’ve never let us down during a very difficult season. Thank you so much for always being on our side and for helping us get Man United back on track.

“We know we can count on you.”

Firstly, I am really happy to see Ronaldo is staying at United for another season.

We haven’t got a lot of options up front but the 37-year-old has proved he can still score goals at the very top.

Ten Hag would be silly to ignore that in a team that is already full of problems.