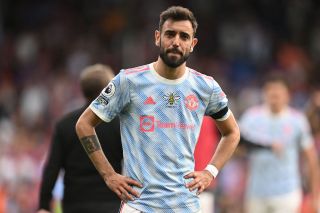 Bruno Fernandes could get a new squad number this summer.

The Portugal international looks set to take up the no.8 shirt which will be left vacant after Juan Mata’s departure.

In the Nations League last night, the Portuguese Magnificio starred in a 4-0 win over Switzerland and played a role in one of Cristiano Ronaldo’s two goals.

Fernandes revealed in a Twitter Q&A that the no.8 as his ‘dream number’, but it has been occupied by Mata since 2014. The Spaniard is one of several United midfielders leaving the club this summer, alongside Jesse Lingard, Nemanja Matic and Paul Pogba.

Fernandes said (via Daily Mail): “I hope to get it (no.8) one day… but for now I hope to have my brother Juan Mata close to me.”

That said, Fernandes also revealed that his current shirt number, no.18, does still carry significance.

“No 18 is also the birthday of mu wife and another reason is, when I grew up, I saw Paul Scholes playing in it and for me having this shirt and this number of an amazing player is something I will enjoy. I have a lot of responsibility.

It may be worth keeping all of this in mind when the new kits are released. I’m sure there will be children asking their parents for the new jersey, along with Bruno Fernandes’ name on the back, but I would hold fire for a few weeks to see if he switches squad numbers.