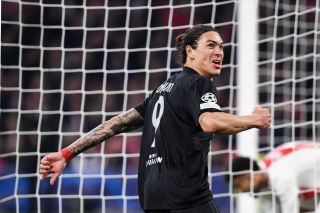 Manchester United offered Benfica the chance to sign Anthony Martial in a cash plus swap deal for Darwin Nunez.

That is according to Benfica blog Terceiro Anel, who suggest the Red Devils were ready to give Benfica £64 million as well as Martial in a bid to sign the Uruguayan goalscorer.

But, it is reported that Benfica turned down the offer, and they want £100 million for Nunez’s signature this summer.

This would also mean that they are not interested in Martial.

With an array of top European clubs circling around Nunez, it makes sense for the Portuguese outfit to hold out for better offers, and Nunez will also have a decision to make on his future.

It would’ve been a shrewd bit of business to get Nunez in and Martial out in the same deal.

Unfortunately, Martial’s value has dropped in the market after an underwhelming loan spell at Sevilla.