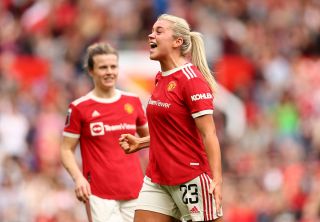 Congratulations to Alessia Russo on being named Manchester United Women’s Players’ Player of the Year for 2021/22.

Russo earns the award being voted by her team-mates. She scored 11 goals in 30 appearances in all competitions throughout the campaign, which is the best goalscoring haul of her career to date.

The England international registered four assists in the WSL.

As an extra reward for her impressive form this season, the 23-year-old has been selected in the provisional 28-player England squad for the European Championships this summer.

Well done to Russo on a memorable campaign, at least on an individual note.