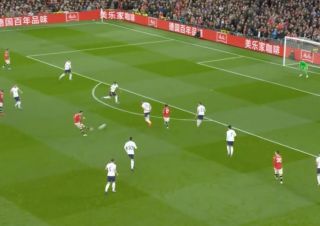 Cristiano Ronaldo has won Manchester United’s Goal of the Season award after finishing the campaign as the club’s top goalscorer.

The Portuguese star was named Sir Matt Busby Player of the Year for a fourth time this week, equaling David de Gea’s record, and Ronaldo has now picked up another individual award.

Ronaldo’s standout goal came when he scored a hat-trick in the 3-2 win over Tottenham Hotspur at Old Trafford.

The goal, as you can see from every angle in the video clip below, is a worthy winner for Goal of the Season.

Enjoy every angle of @Cristiano's Goal of the Season winner 🔥👇#MUFC pic.twitter.com/TfaLWwTrPp

Ronaldo picks up the ball from around 30 yards out before taking one touch to set himself up for a shot. The ball ends up in the back of the net seconds later before our number 7 did his iconic ‘Siuuu’ celebration.

It will be interesting to see how much of an influence Ronaldo will have on Erik ten Hag’s side next season. In his first season, the Dutchman could be left with limited options up front – but he needs to ensure other players chip in with goals, not just the 37-year-old.