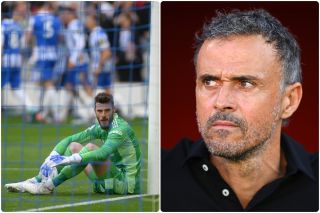 Luis Enrique is one of the top coaches in European football.

Prior to Erik ten Hag’s appointment, the former Barcelona treble-winning manager was listed among Manchester United’s managerial candidates, which would have been terrible news for David de Gea.

Enrique, 52, is never afraid to cause a stir. He selects the players he wants rather than stars that should be there on merit.

But this has become a problem for De Gea because Enrique is not a fan of the United goalkeeper, who was named the Players’ Player of the Season for 2021/22.

In turn, Unai Simon has been Spain’s number one for some time, but Enrique can’t even find a place for De Gea in his squad anymore. Brentford’s David Raya and Brighton’s Robert Sanchez and both preferred by Enrique.

Enrique has been speaking to the press ahead of Spain’s clash with the Czech Republic.

“I look to have three starting goalkeepers and I think that right now I have them,” Enrique said, as quoted by Marca. “Honestly. I wouldn’t have an issue with any of the three of them starting.”

The Spain manager also explained the reasons for De Gea no longer being his first choice.

“Unai has accumulated some interesting experience,” he added. “A goalkeeper should start the play and generate the first superiority, they must dominate the aerial play.

“I need a goalkeeper that transmits peace and calmness to me, that doesn’t mean they won’t make mistakes, errors are part of football. What they generate I like a lot.”

It’s clear that Enrique doesn’t trust De Gea and only time will tell if Erik ten Hag runs into the same problems at Old Trafford.

Every manager at United has stuck with De Gea since his arrived at the club in 2011.