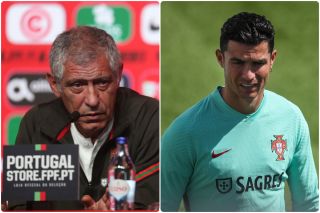 The 37-year-old was without question United’s best player in an extremely disappointing season. He even picked up the Sir Matt Busby Player of the Year award for his efforts since returning to the club a year ago.

With United failing to qualify for the Champions League, there had been some doubt over whether the five-time Ballon d’Or winner would see out the final year of his contract.

Ronaldo understandably waited to make his decision because Erik ten Hag’s appointment took so long, and reports claim that he was not all that impressed by Ralf Rangnick as interim manager.

Earlier this week the United veteran gave his clearest indication yet that he intends to stay at Old Trafford, by saying he looks forward to working with Ten Hag.

“I was happy of course, to be back in a club that really raised my career so it was unbelievable, the feeling when I came back again, it was nice to feel the supporters, the happiness of them was great,” Ronaldo said.

“I was and still am very happy to be here.

“And what I have to say to the fans is they are amazing even when you lost games they always support us, they always are with us, the supporters are always in my heart and it’s the people that we all should respect because they are always on our side.

“For me, the most important thing is to try to win the games and try to win some championship or some cup but I believe that Manchester United will be where they belong. As I say before, sometimes it takes take but I still believe.”

His national team manager has come out to support Ronaldo’s decision.

“I’ve said to many times, Cristiano is the best player in the world,” Santos said, as quoted by the Manchester Evening News. “The choice to stay at Manchester United is his choice, it’s not for me to say.

“It’s a personal choice. What I do know is that there are few who have the opportunity to play for Manchester United.”