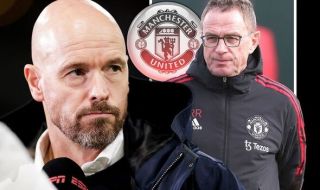 New Manchester United manager Erik Ten Hag did not agree with former interim boss Ralf Rangnick’s earlier assessment that the Red Devils need to sign as many as 10 new players this summer.

That’s according to a recent report from Goal, who claim the Dutch tactician does not feel a squad overhaul on the scale of 10 new players is required.

Speaking earlier in the year while in charge of United, Rangnick, who spoke to reporters, as quoted by Sky Sports, said: “If you analyse the situation it is not difficult to analyse. For me, it is clear there will be six, seven, eight, maybe ten new players. Before you sign those players you need to be aware how you want to play.”

However, although agreeing that the squad’s size needed to be trimmed down and expected to address all areas of the team, it is unlikely that the 20-time league winners will make double figure signings this summer.

Instead, according to these latest reports, Ten Hag is far more likely to sign five players.

Although no names are mentioned, it would be fair to assume the Dutch manager has highlighted a new centre-back, full-back, striker and at least two new midfielders following Paul Pogba, Jesse Lingard, Nemanja Matic and Juan Mata’s impending departures.

However, regardless of how eager the United faithful are to welcome new signings, they may be forced to wait.

Ten Hag is currently away on holiday until the end of the month and has yet to meet the Red Devils’ playing squad in person.