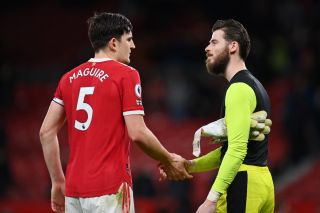 Manchester United star David de Gea has enjoyed a stellar season between the goalposts and despite having just one year remaining on his contract, there have been calls from the club’s support for the Spaniard to be installed as the next captain.

Harry Maguire, the current skipper, has been the subject of intense scrutiny over the last 12 months and is now doubtful to continue as the team’s leader, with Erik ten Hag set to make a final decision when pre-season begins on June 27.

The former Leicester star was made captain by Ole Gunnar Solskjaer just six months after joining the club when Ashley Young was let go.

Now, it’s believed that Ten Hag will allow the dressing room to choose the next captain, with a vote deciding who the team’s leader is going to be. That’s according to The Sun, who say that De Gea has emerged as the favourite to take the armband ahead of Cristiano Ronaldo.

As per the report, the idea of replacing Maguire with De Gea is not a ‘rebellion’ against the England international but rather a show of faith in De Gea, who has found his form at the club again.

Although Ronaldo remains in the running to become captain, it’s said that De Gea has impressed teammates and staff over the last 12 months.

SN’s verdict…
The captaincy at United has been a sensitive topic for quite some time, with not even Wayne Rooney gaining unanimous support from the club’s support in recent years.

Rooney was handed the captaincy by Louis van Gaal in 2014 and upon his departure in 2017, it has landed in the arms of Michael Carrick, Antonio Valencia, Ashley Young and Harry Maguire.

As mentioned above, De Gea has just one more year on his current deal and as things stand, it’s not looking like he will be renewing those terms anytime soon, making any captaincy a short-term decision.

The same argument could be made in Ronaldo’s case – the 37-year-old is not certain to stay at United this summer and also has just 12 months remaining on his deal.

The issue is that there are not many figures at United you would trust with the armband, with midfielder Bruno Fernandes being the only other reasonable candidate.