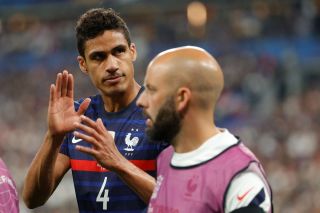 Raphael Varane’s injury-ridden year continued as he hobbled off France’s 2-1 defeat to Denmark earlier this week with another hamstring injury, the second one sustained on international duty this season.

With just three weeks remaining before United begin their pre-season preparations, supporters have now been offered an update on the 29-year-old’s condition.

According to French outlet RMC, exams taken on Saturday morning have revealed a small injury to his left hamstring and although the issue is severe enough for him to withdraw from the France squad, he is expected to be back in action within 10 days – a major boost for Ten Hag.

Varane is now expected to go on an early holiday, which should offer him the chance of joining Ten Hag’s first pre-season earlier than previously thought.

Ten Hag will officially begin preparations on June 27th, with non-internationals returning at the end of this month. Players who have been on international duty are not expected back until the first two weeks of July.

A new manager always wants as much time as possible to work with their new players and Ten Hag will be no different. Ole Gunnar Solskjaer had just one full pre-season with his squad despite being in charge for over three years – Ten Hag will be desperate to avoid such a scenario.