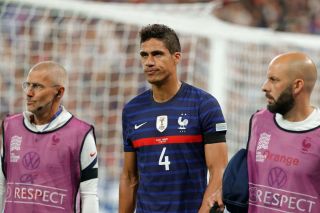 Manchester United defender Raphael Varane has suffered yet another injury whilst on international duty with France. In his first season at Old Trafford, the centre-back missed 15 games due to injury and this fresh flare up could concern new manager Erik ten Hag.

It won’t concern Ten Hag in the sense Varane could miss the start of the season. He won’t. The World Cup-winning defender hobbled off with a hamstring injury in the defeat against Denmark, but I suspect he will be fine in less than two weeks.

Varane should probably give the rest of the internationals this summer a miss and focus on recovering for the 2022/23 campaign.

The United defender came off after playing 61 minutes, but Didier Deschamps has yet to update the media on the matter, as per L’Equipe.

Ten Hag will be planning ahead for the new season and I wonder if he has doubts over how many games Varane will play. Maybe that’s why the club are looking to sign two centre-halves this summer.

The French star missed 15 games through injury last season, suffering from three separate muscle-related injuries. That is far too many for our star centre-back.

Varane is no good to United if he’s injured all the time.

One response to “Raphael Varane suffers another injury playing for France”