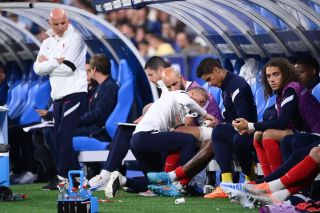 Manchester United centre-back Raphael Varane hobbled off with an injury while playing for France on Friday night.

To United fans, this type of headline has been read out far too many times in the past year.

Varane was forced off after an hour in his country’s Nations League defeat against Denmark.

French publication L’Equipe state that Varane has pulled out of the national squad with a “small injury” to the left hamstring.

It comes as yet another setback for the defender who has been plagued by injury since his transfer to United last summer. Varane missed 13 league games in his first season and Erik ten Hag needs to do something about that.

French journalist Benjamin Quarez says Liverpool centre-back Ibrahima Konate will replace Varane in the France squad for the rest of their fixtures.

The new manager is already in the market for a new option at the back, though with United’s defensive problems it would make more sense to buy two centre-halves.

United have been strongly linked with moves for Ajax’s Jurrien Timber and Villarreal’s Pau Torres.

Hopefully, Varane can rest up for the summer and come back fully recharged and with stronger hamstrings…