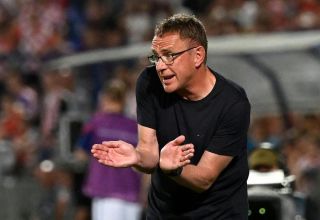 Ralf Rangnick was appointed interim manager of Manchester United at the end of last year, with the German then expected to take up a two-year consultancy role at the club.

Following confirmation of Erik ten Hag’s appointment at United, it was then revealed that Rangnick had accepted a job as Austria’s national team manager. At the time, the official word was that Rangnick was going to juggle both jobs, with the role at United being part-time.

Instead, those plans were scrapped last month and United cut ties with the experienced German, leaving a large section of the club’s support wondering what the point was in the first place.

Having missed out on World Cup qualification prior to Rangnick’s appointment in Austria, he has now been tasked with getting them to the next European Championship and his reign has started in the best possible way.

Rangnick led his side to a dominant 3-0 win over Croatia in their maiden UEFA Nations League game, with Denmark beating France in the other game in the same group.

Goals from Arnautovoic, Gregoritsch and Sabitzer ensured a perfect start for Rangnick as he takes on his first international job.

SN’s verdict…
Rangnick’s departure from United was unexpected and despite his stint as interim boss being extremely underwhelming, there was still an acceptance that that job had only been offered to him due to the willingness to capture his expertise on board level.

Instead, United limped across the finish line on the pitch and a mass exodus of staff sparked wholesale changes in the United hierarchy, with Rangnick playing no part.

The former RB Leipzig chief was not involved in talks to decide United’s new manager either and ultimately leaves United with a poor reputation.