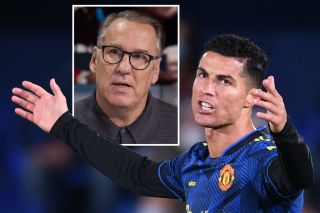 The Red Devils went five years without a trophy as they settled for sixth in the Premier League and reached the last 16 in the Champions League.

Ole Gunnar Solskjaer was sent his marching orders in October when Michael Carrick was appointed caretaker manager for a brief period.

However, results did not improve following Ralf Rangnick’s appointment and it is clear that new manager Erik ten Hag has a huge job on his hands in order to take United back to the top, where we belong.

Most of the squad has come in for strong criticism after an underwhelming campaign, and even Ronaldo had his critics, despite being the club’s top scorer with 24 goals in all competitions (18 in the Premier League).

Obviously, Ronaldo is not the force he once was, but the 37-year-old was not helped by his underperforming team-mates.

Former Arsenal star Paul Merson has launched a defence of Ronaldo, saying (via Sportskeeda): “Cristiano Ronaldo is probably the only player at Manchester United who hasn’t been a disappointment this season. His individual numbers add up and he has been their most consistent player over the past year.

“While Ronaldo did score his goals, I don’t think he helped the team much. The new manager’s got a hard job coming up.

“If you keep Ronaldo for another year, that’s another year without much of a plan. If he does well next year and Manchester United come third, it’s a waste — because he’ll leave after that.

“David de Gea was the only other player close to Ronaldo’s level at Manchester United. He’s an excellent shot-stopper — if I’m a manager, that’s the first thing I want in a goalkeeper. I thought he was back to his best.”

On the other hand, De Gea won the Players’ Player of the Year award.