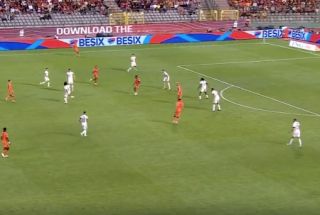 There isn’t an international tournament taking place this summer because the World Cup was moved to the winter, which means we will be keeping a close eye on Manchester United players and potential transfer targets in the upcoming internationals.

In the Nations League tonight, the Netherlands had a convincing 4-1 win over Belgium. That meant we could watch two United transfer targets as Frenkie de Jong and Jurrien Timber both featured in the game.

De Jong played in a pivot against Belgium — very different to the role he’s struggled in at Barcelona — and they couldn’t contain him. Even for the first goal, the 25-year-old plays a simple pass to Tottenham Hotspur star Steven Bergwijn. It counted as an assist but credit to the winger for a great strike.

You may say we’re clutching for straws – it was hardly a pass that actually contributed to the goal because nobody, not even De Jong, expected Bergwijn to shoot — but try to look at the bigger picture.

De Jong doesn’t play a complicated pass. He keeps it simple and space opens up to allow his teammate to have a shot in front of goal.

Thankfully, for the Netherlands, they went on to win the game by a three-goal margin.

Let us know in the comments section if you think United will sign De Jong this summer?