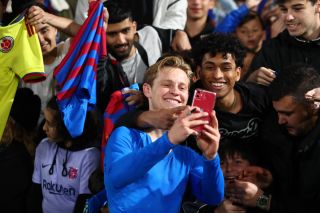 Momentum is building as Manchester United chase Barcelona midfielder Frenkie de Jong in the transfer window. The club will say goodbye to Paul Pogba, Nemanja Matic and Juan Mata this summer but the Netherlands star could be on his way as one of their replacements.

According to Sport, the deal has a ‘serious chance’ of going through, which I’m sure will be enough to excite our readers.

De Jong is an incredible midfielder and he was back to his best for the Netherlands last night after a tough season at Barcelona.

The Spanish publication claims De Jong is an absolute priority for new manager Erik ten Hag, with the club setting a deadline of mid-June to complete a deal.

An agreement is reportedly ‘very close’ and Barcelona can expect to receive £68.7 million for the transfer.

With talks believed to be ‘accelerating’ between the two clubs over a potential deal, we now have suggestions that United will make a serious effort to sign the midfielder.

It is noted that playing in the Champions League still holds weight for De Jong, but he is beginning to doubt it as a possibility with it becoming clear that Barcelona are ready to cash in on the former Ajax star.

We spoke about Frenkie de Jong on the latest podcast and the reasons behind his plea to stay at Barcelona, even though it looks very unlikely due to the club’s struggles to balance the financial books. Listen to the Strettycast.