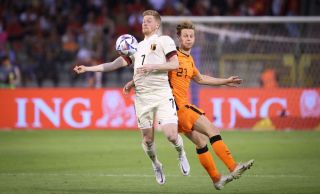 Barcelona midfielder Frenkie de Jong starred for the Netherlands as they hammered Belgium 4-1 in the Nations League on Friday night.

With the season over and Manchester United fans excited about potential signings, we kept a close eye on Louis van Gaal’s side to see if any of our reported targets could impress on the international stage. Jurrien Timber and Frenkie de Jong both played but it was the latter who really stood out.

There is a lot of speculation surrounding De Jong at the moment and it’s clear that Erik ten Hag is trying to bring him to Old Trafford. While the 25-year-old wants to stay at Camp Nou, it is understood that talks have ‘accelerated’ between the two clubs over the past 24 hours.

The Manchester United target found Tottenham Hotspur winger Steven Bergwijn in space with a simple pass before the interval as the Dutch opened the scoring. Three second half goals followed and a result was out of reach for the Belgians.

Though that was the midfielder’s only goal contribution, he helped push the side forward throughout the game and Belgium couldn’t contain him.

It’s the sort of performance that will excite United fans if Ten Hag is successful in his attempts to sign De Jong.