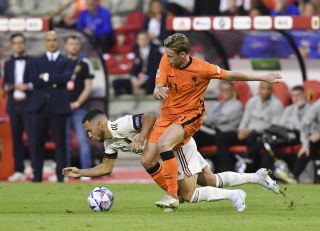 While the Netherlands star has stated publicly he wants to stay at Barcelona, the Red Devils have seemingly been handed fresh hope after De Jong admitted that his role for the national team suits him more than in club action.

The 25-year-old is understood to be a priority target for new manager Erik ten Hag, who worked with the midfield ace at Ajax, but striking a deal may not be as straightforward as we’d like.

Speaking  after the match, De Jong spoke about his preferred style of play, which he clearly believes can help get the best out of him.

“I like to be the first player to receive the ball from the defenders. In the national team I play differently compared to Barca. And I think this one fits me better,” De Jong said, as per the Daily Mail.

An assist for Tottenham Hotspur winger Steven Bergwijn in the first half sent the Dutch on their way for a memorable win in the Nations League.

His remarks could put his potential suits on red alert and we certainly like to see De Jong wearing red next season.