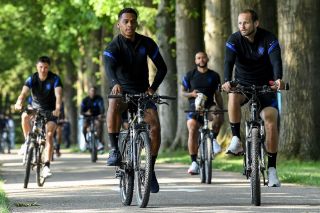 Ajax defender Jurrien Timber has been strongly linked with a move to Manchester United this summer, with the 20-year-old emerging as one of Erik ten Hag’s top targets in his first transfer window.

Timber is thought to be a priority signing at United, with centre-back an area where they would like to strengthen following their worst-ever tally of conceded goals in the Premier League.

United have had varied success in signing players from the Eredivisie, with the likes of Ruud van Nistelrooy, Daley Blind and Memphis Depay experiencing very different stints at Old Trafford.

Blind, who was one of Louis van Gaal’s first signings in 2014, was appreciated by the United faithful and has now commented on his teammate’s future, admitting he would like him to stay at the Amsterdam club.

“He is wise enough to make his own choices,” Blind said in a press conference, via The Metro. “I don’t need to explain what kind of talent and player he is. How important he is to us.

“What he shows from the start though is unbelievable. Of course, as a teammate, I hope he stays for another year. I cannot influence that.

“I can only say that Ajax must do its best to keep him.”

SN’s verdict…
It goes without saying that Blind would like to see his side keep on of their best players but should United be able to sign Timber, it would be seen as quite the coup.

Timber’s versatility is another reason why Ten Hag is desperate to land the youngster, with his ability to play in central defence, out wide and in midfield offering him options no other player in the current side can.

A mass exodus of first-team regulars has already begun at United, with six players confirmed to be leaving upon the expiry of their deals at the end of this month.

Two of those are midfielders and departures are expected in defence, which adds importance to landing a defender this summer.