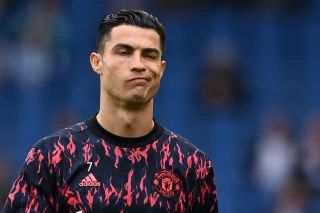 Cristiano Ronaldo is one of very few players to end this season with his stocks remaining high, having recently won the Matt Busby Player of the Year award following his sensational return to Manchester United.

The 37-year-old scored 24 goals across all competitions this season and despite being linked with moves away from the club, he is expected to spearhead United’s attack under Erik ten Hag next season.

With one year remaining on his contract, he has now admitted that despite the troublesome time they are currently enduring, United will make a return to their glory days of the past.

“It’s still my motivation to carry on working hard, to still love the passion for the game, and of course Manchester and my teammates help me all the way so I have to appreciate all the people who help Cristiano,” he is quoted as saying by the official Manchester United website.

“It’s always nice to score goals for this club. When it is a hat trick it’s even more [nice]. But the most important thing for me is to try to win the games and try to win some championship or some cup but I believe that Manchester will be where they belong. Sometimes it takes time, but I still believe.”

SN’s verdict…
The last 12 months have seen wholesale changes brought forward at United, with Darren Fletcher and John Murtough now believed to be in powerful roles to turn United’s fortunes around.

Erik ten Hag’s appointment also speaks to a change of strategy, with the Dutchman clearly a manager on an upwards trajectory. Previous appointments were still living on past merits or simply made with a fantasy scenario in mind.

Despite turning 38 next year, Ronaldo is still United’s most potent goal threat and it would be irresponsible to discard that ability to score on command.