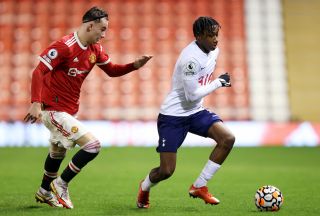 Next season Martin Svidersky will be playing his football in La Liga but the Slovakian youngster has not confirmed which Spanish club he will be joining when he leaves Manchester United this summer.

Svidersky’s contract ends at United and he had decided not to extend it after spending four years at the club.

Back in October, Stretty News revealed that the U23s player had rejected a contract renewal offer from the club amid interest from clubs across Europe. We followed up with another report four months ago stating that the midfielder favoured a move to Spain, with Villarreal and Valencia interested in signing the young talent.

Our sources were not wrong.

We first reported on Martin Svidersky’s future in October.

Article from 7 months ago: https://t.co/4PyWxDLDhU

The departing youngster has done an interview not only to confirm his exit from United, but also to tell everyone he will be moving to Spain this summer.

Moreover, it is understood that he has already completed a medical at his new club.

“I have spent the last days in Spain, where my steps will continue,” Svidersky told RTVS, as per Sportnet. “They will follow in the first Spanish league, La Liga. I have high expectations, it will be a new experience, a new country.

“Spain came to me as the best option for my development. It is an opportunity to play men’s football and get more chances.”

We look forward to hearing where Svidersky ends up and wish him the very best of luck in the future.