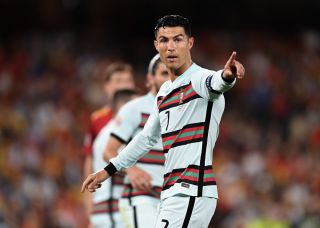 Portugal manager Fernando Santos decided to bench Cristiano Ronaldo in last night’s Nations League match against Spain. The game ended in a 1-1 draw as our veteran forward couldn’t turn the game in his country’s favour when he came on as a second half substitute.

It was the first time since 2017 that Ronaldo had been named on the bench, so the decision would’ve raised eyebrows in Portugal when the team was announced.

Santos explained his decision during his post-match press conference, saying: “It was just one option – a manager’s option, a tactical option.

“This is how our games are going to be decided. For this game, I thought it was important to have a player like Andre [Silva] starting. He is hard-working, closes in behind, he can do a few things that Cristiano cannot do the same way.”

The experienced Portugal manager went on to say: “Cristiano can do many other things and that is why he is the best player in the world but this was my choice this time. I am going to rotate the players a lot during the next three games.”

All of Santos’ players have just finished up their domestic campaigns and it wouldn’t make sense to burn his players out for the Nations League. Ronaldo is 37-year-old and needs to be managed carefully over the next year. That will be a challenge for new manager Erik ten Hag because sources have made it clear on a few occasions that Ronaldo doesn’t react well to being left out of the team.

Surely, at this stage of Ronaldo’s career, he understands the reasons why he can’t play every game?