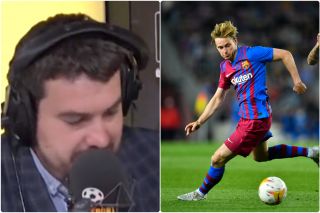 New manager Erik ten Hag has made his former Ajax star one of his main targets as he plans an overhaul at United this summer, with several players set to leave when their contracts expire.

Paul Pogba and Nemanja Matic will be among the first to walk through the exit door and the pair made an array of appearances in midfield this season. Not only does Ten Hag need to replace those players, he needs to find talent that will fit into his plans for the future.

It remains unclear whether the De Jong is willing to move to a club without Champions League football next season, with the 24-year-old noting that he is happy at Barcelona.

However, what will happen to the Netherlands international if the La Liga giants decide to cash in to allow them make signings of their own in the transfer market?

Alex Cook appeared on talkSPORT radio this morning to give his latest update on De Jong’s situation at Camp Nou. He claims that the Old Trafford side have ‘accelerated’ their efforts to sign the midfielder.

👀 “Talks do seem to be accelerating…but he said publicly he wants to play for Barcelona and play #UCL football!”

The report explains United have put their pursuit of Benfica striker Darwin Nunez on hold for now.

De Jong had a tough season at Barcelona but it is understood that manager Xavi wants to keep him.

Let us know in the comments section if you think United should sign De Jong this summer.