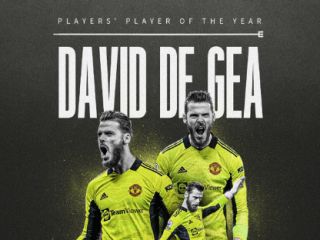 The Manchester United squad has had its say.

In what was a disappointing campaign for our first team, David de Gea played every minute of Premier League action and pulled off a series of top saves.

The Spaniard earned the club’s Player of the Month award on three occasions throughout the season — in November, December and January.

De Gea has now been voted Manchester United Players’ Player of the Year four times, which is more than any other player in the club’s history.

We would like to send our congratulations to De Gea on his latest award.

On Saturday, we’ll find out who wins the Sir Matt Busby Player of the Year award.