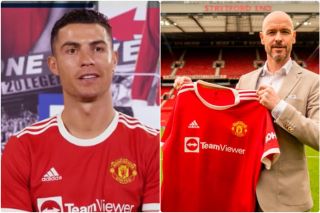 Manchester United star Cristiano Ronaldo has spoken about Erik ten Hag for the first time in an interview with club media.

The Portugal superstar will be preparing for another season at Old Trafford after returning to the club last year, only to be part of a side that failed to qualify for the Champions League.

Everyone is hoping to see change under Ten Hag and Ronaldo has made it clear that he has been impressed by the Dutchman’s work to date at Ajax, where he won three Eredivisie titles.

With Ten Hag set to oversee a major rebuild, and he will presumably build that team around Ronaldo next season, CR7 has had his say on the new manager and his plans to bring success back to Old Trafford.

He praised Ten Hag’s work at Ajax and has urged everyone to give the new boss time.

“I know he did a fantastic job for Ajax and that he’s an experienced coach but we need to give him time and things need to change the way he wants,” Ronaldo told MUTV.

Ronaldo also shared his feeling ahead of next season, saying: “We are happy and excited, not only the players but the supporters as well. I wish him the best and let’s believe that next year we’re going to win trophies.

“I was happy of course, to be back in a club that really raised my career so it was unbelievable, the feeling when I came back again, it was nice to feel the supporters, the happiness of them was great. I was and still am very happy to be here.”

It will be interesting to see how Ten Hag manages Ronaldo next season because there are fears he doesn’t take too well to being left out of the team.  And, at 37-years-old, it would be crazy to plan a season with Ronaldo starting every game.