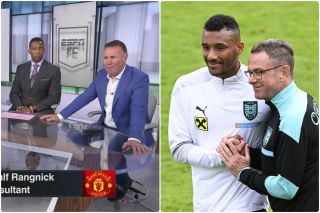 It was announced this week that Ralf Rangnick’s time at Manchester United has come to an end, meaning he won’t go from interim manager into a consultancy role, which is something the club planned when he arrived at the club at the end of last year.

The German was set to transition into a two-year consultancy role at Old Trafford, but his stint ended prematurely to allow him focus on the Austria job. We will never see if he could an ever-changing influence on the way Manchester United is run.

That said, I always had doubts over whether Rangnick would be given the power needed at United.

Now it could be asked if he even deserves that in the first place?

A lot has been said in the past week about Rangnick’s job at United and it was far from a success story. He will leave the club as our worst manager for half a century since Frank O’Farrell’s brief reign in charge in the early 1970s.

Speaking on ESPN FC, former Chelsea and Scotland midfielder Craig Burley was extremely critical of Rangnick and United in his conversation with Mark Ogden, saying: “Quite frankly, Ralf Rangnick was just out of his depth wasn’t he? It became quite apparent early on that he was out of his depth.

“Now, there was a bit of everything going on here. There was underperforming players, there were leaks to the media, there was everything. But it was crystal clear that he had no solution on the field, nothing.

“There was nothing, absolutely nothing. And that’s not down to players not being bothered, not after a couple of games, maybe after three or four months. The responsibility lies with the Manchester United board.

“So it was crystal clear Rangnick was out of his depth but just notch this on the board as one of the hundreds of bad decisions this club has made in the last eight or nine years since Sir Alex Ferguson left the club.”

There is no point glossing over how poor things became under Rangnick.