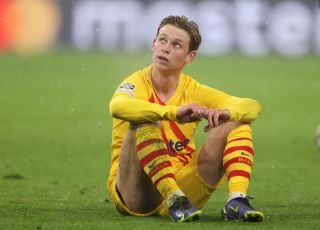 After already confirming that Paul Pogba, Juan Mata and Jesse Lingard will be leaving the club, it goes without saying that manager Erik Ten Hag is going to need to sign at least one new, high-profile central midfielder this summer.

One player who is understandably on Ten Hag’s wishlist is De Jong. Both men know each other well following their time spent together while at Ajax.

However, with De Jong now at Barcelona, forcing a reunion will not be easy for the Red Devils’ recruitment team.

Leading transfer expert Fabrizio Romano recently reported that the 20-time league winners had opened ‘direct’ talks with the Catalan giants, who, in turn, are wanting at least £72m (€85m) in exchange for their Netherlands international.

Reacting to the widespread reports, as well as lifting the lid on the club’s stance, Barcelona vice president Edouard Romeu, who spoke to reporters, as quoted by MEN, said: “We have not budgeted for the sale of players.

“Frankie de Jong? If he leaves, it’s a technical decision, not an economic one. But I repeat, we have planned no departure.”