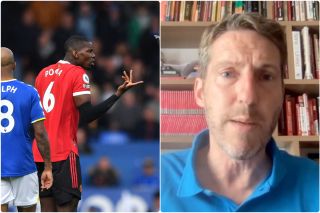 Manchester United fans have watched Paul Pogba closely over the past six years following his return to the club in 2016.

After emerging from our academy — winning the FA Youth Cup in 2011 — Pogba decided to part ways and further his development at Juventus. He won the lot in Italy before returning to Old Trafford where there were plans to solve unfinished business as far as the Frenchman should’ve been concerned.

It is incredibly telling that the news of Pogba’s immediate exit, which was announced by United this week, fans were quick to react on social media with many choosing to stick the boot in on the France international.

I thought it was bizarre that the club weren’t quite so dismissive of their departing midfielder as they paid tribute to Pogba with a long statement which documented his two spells at United, as per ManUtd.com.

Pogba showed glimpses of brilliance but he underwhelmed for the most part.

However, United We Stand editor and respected journalist Andy Mitten has given a fair account on Sky Sports to explain why fans are not upset about Pogba leaving as a free agent.

Mitten argues that some of the blame must sit with the player and we couldn’t agree more.

“The fans are not sad to see him go,” Mitten told Sky Sports.

"The #MUFC fans aren't sad to see him go…" 👀@AndyMitten believes there was 'little' connection between departing Paul Pogba and the Man United fanbase 🔴 pic.twitter.com/cN2FaJH88t

Where next for Paul Pogba?

It looks like Pogba will be heading back to Turin partly because Paris Saint-Germain are no longer at the negotiation table and it sounds like Real Madrid have bigger fish to fry after missing out on Norwegian goalscorer Erling Haaland.

Mitten is right because I haven’t lost any sleep over losing Pogba this summer. It gives Erik ten Hag a chance to start from scratch in midfield, and along with Nemanja Matic’s exit, we really should be signing at least two central midfielders this summer.

Pogba is likely to be at Juventus and they’ve got problems of their own to solve next season. It remains to be seen whether it’s a good idea to add an inconsistent midfielder to the mix.