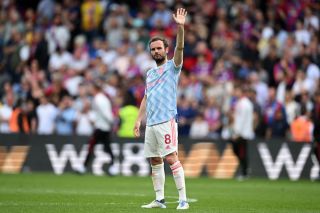 Manchester United have confirmed Juan Mata will leave the club once his contract expires at the end of June.

A statement was released on the club’s official website on Thursday afternoon to announce that Mata would no longer be a United player at the end of the month. That means he will be free to join another club on a free transfer.

The Spaniard departs the club after 8 years at Old Trafford following his January transfer from Chelsea in 2014.

During his time at United, Mata was a favourite among fans, even in the latter stages when he played less under Ole Gunnar Solskjaer. He is a brilliant ambassador for our beautiful game, but it could be argued that we never played to his strengths.

Classy until the end ❤️

I think Ralf Rangnick realised at the end of the season that he could’ve afforded to have given Mata more minutes this season, especially as a creative but calm head in midfield, with the kind of experience that will be rub off on young players.

Mata made his final appearance for the Red Devils in their 1-0 defeat to Crystal Palace on the final day of the season. He played 285 games for the club, scoring 51 goals and winning four trophies.

We would like to wish him well in the future.