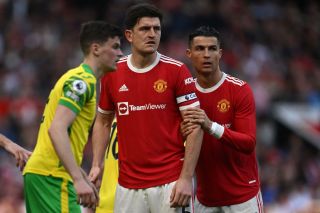 Harry Maguire is one of many Manchester United players under the microscope at the moment, with the Reds captain currently enduring his worst run of form since he joined the club in 2019.

The 29-year-old’s position in the team is under threat following the disappointing campaign and he has now admitted that the teams levels have been far from good enough.

One player has, however, escaped Maguire’s criticism. Cristiano Ronaldo ended the season on 24 goals in all competitions and was nominated for this year’s PFA Player of the Year award earlier this week.

The 37-year-old kept United ticking over in the final two months of the campaign and Maguire has now explained how he’s the only player who hasn’t dropped his levels this season.

“We were nowhere near good enough throughout the season. We were conceding too many goals, not scoring enough goals,” Maguire told The Times.

“And it just spiralled. You could see towards the end of the season, the confidence wasn’t there, and the belief in the group. Every player at the club has not performed to a level that’s… apart from Cristiano (Ronaldo) with his goals.”

SN’s verdict…
The sentiment that Ronaldo is one of a small selection of players who can leave this season behind them with their heads held high is shared by many United supporters. David de Gea will also take some plaudits from the campaign, with the Spaniard improving on last season’s disappointing season.

Erik ten Hag is just weeks into the job and he is yet to meet with his new players but sitting down with Maguire, the club captain, will be high on his to-do list as he aims to turn the club around.

The Dutchman has already impressed in his first few media appearances and his decision on the captaincy is eagerly anticipated. There are calls for Maguire to be stripped of the armband, with Ronaldo among the players tipped to take over.