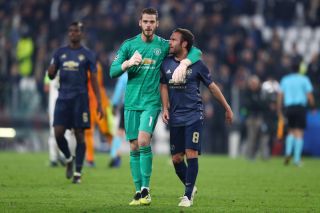 After eight years at the club, Juan Mata’s departure was confirmed earlier on Thursday as the Spaniard is set to leave upon the expiry of his contract at the end of this month.

The 34-year-old is one of the few success stories of the post-Sir Alex Ferguson era and although he would have liked to feature more over his last two or three years at Old Trafford, he will leave through the front door.

Since he made that spectacular Carrington entrance by helicopter in 2014, Mata has been famously close with David de Gea – the pair were also teammates at international level prior to his switch from Chelsea.

Now, De Gea has taken to Twitter to say his farewells with an emotional message, as seen below.

“Thought this would be a very difficult one to express into words but when I thought about it more, the main feeling I am left with is happiness,” De Gea wrote.

“This guy has been a teammate, a friend and is my family. The ultimate professional, one of the best players and people you could have graced in your life.

“I’m so thankful to have been on so many journeys with you, happy that our paths crossed, and we shared a dressing room together. I love you my brother, I wish you everything and absolutely nothing but joy and success in your next stage of an unbelievable career.”

Mata is one of six players to have confirmed their departures this summer, with Paul Pogba, Edinson Cavani, Jesse Lingard, Nemanja Matic and Lee Grant also doing so. Interestingly, only the Spaniard received such widespread affection on social media.