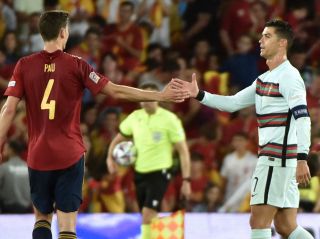 Goals from Alvaro Morata and Ricardo Horta led to a 1-1 draw between Spain and Portugal in their Nations League clash.

Morata gave Spain the lead from close range in the Nations League A Group 2 opener after 25 minutes of play. Portugal substitute Horta levelled the scoring eight minutes from time, after coming on from the bench, as he sent the ball past Unai Simon.

After the game, Manchester United star Cristiano Ronaldo was pictured swapping shirts with Pau Torres. This jumps to our attention because the Spanish defender has been linked with a move away from Villarreal this summer, and it has been suggested that the Red Devils could make an offer as Erik ten Hag looks to bolster his defence in the transfer market.

It begs the question… will they be team-mates next season?

According to Fabrizio Romano, Torres has a release clause worth €55-60 million.

Manchester United are discussing Villarreal’s Pau Torres as one of 3/4 options for the new centre back. No proposal made yet, as it depends on Erik ten Hag decision and Man Utd board changes. 🔴🇪🇸 #MUFC

The talented centre-back is not the only defender on United’s list as the transfer window opens.

While Ajax starlet Jurrien Timber is a priority for Ten Hag, it would be nice to see United make some statements this summer to prove the board are going to back the new manager.

Is it too much to ask for two top centre-backs in the one window?