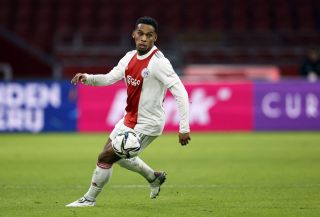 Erik ten Hag has targeted a Dutch core of players in his first transfer window at Manchester United, with Ajax centre-back Jurrien Timber and Barcelona midfielder Frenkie de Jong among those to be linked.

Timber, who made a name for himself under Ten Hag at Ajax, has been strongly linked with following the 53-year-old to Old Trafford but new reports suggest he could be having second thoughts about a potential move.

That’s according to De Telegraaf, who say that Ajax are increasingly hopeful of keeping Timber this summer due to the World Cup, set to start in the middle of November.

As per the report, the club is receiving ‘more and more’ signals that Timber will be staying at the club due to his position in the team, which would give him a greater chance of being named in Louis van Gaal’s World Cup squad.

Furthermore, the Amsterdam club are looking to renew Timber’s contract, with his current terms running for another two years. A meeting to discuss an extension is believed to be taking place soon.

The return of his twin brother, Quinten, who is currently plying his trade for Utrecht, is thought to be an option to convince him.

SN’s verdict…
It’s been pretty clear that Timber is one of United’s main targets this summer and should the 20-year-old hold reservations about joining United due to a fear of not playing, it would come as a huge blow to Ten Hag.

It would, however, be surprising. United have endured a disastrous season and the introduction of fresh faces would not only revitalise the squad harmony but it will be done with the objective of improving the starting eleven.

Timber’s versatility offers something the current squad can’t and it’s fair to assume that should he join the club, minutes on the pitch won’t be an issue.

You can understand why he would harbor these fears, however. You don’t have to look far to see that Van Gaal has been far from inclined to pick United players in his squad. Since Van Gaal’s appointment last year, Donny van de Beek has featured in none of his selections.