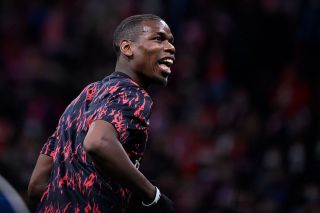 Paul Pogba is set to pocket a £3.78 million loyalty bonus when he quits Manchester United as a free agent later this month.

That’s according to the Daily Mail, who claim Pogba’s six-year spell cost the club a whopping £219 million.

It comes as the final kick in the teeth for fans, with the majority understandably falling out of love with the academy graduate following his return to the club in 2016.

The World Cup winner has been inconsistent over the past six years in a United shirt. There were bright spells and a few highlights but, ultimately, Pogba did not show up in enough big games. He’d rather cup his ears towards the Stretford End.

Manchester United announced on Wednesday that Pogba would be leaving the club at the end of June.

That’s why I think there is sheer irony in using Pogba and ‘loyalty’ in the same sentence – especially when he’s getting an extra pay-off from the club despite running down his contract for a second time.

Usually, I find that I would wish a player well when they leave United, but when it comes to Pogba, I honestly don’t have the energy to pretend to care.

2 responses to “Manchester United to pay £3.78m loyalty bonus to Paul Pogba ahead of free transfer”