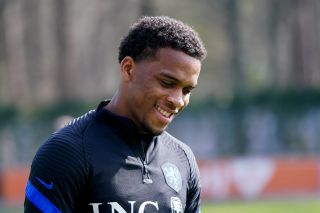 It’s clear from this point that Manchester United are trying to make Jurrien Timber one of their first signings under Erik ten Hag.

The Guardian published a story earlier this week suggesting that talks between United and Ajax are underway, with the Eredivisie champions putting a £43 million price tag on the versatile defender.

An update from the Manchester Evening News claims the 20-year-old is Ten Hag’s preferred choice, but United have also had two rounds of discussions with Braga centre-back David Carmo.

The report states that the Portuguese defender is believed to be a fallback option after earning his first call-up to the national team last week.

We hadn’t heard of Carmo before today, but apparently, he was close to joining Liverpool in January (via The National). That tells you he is a player that is attracting attention, but does he have the same versatility as Timber?

The Netherlands international can play a number of roles – centre-back, right-back and defensive midfield – and United are losing a lot of players this summer.

It’s a signing that could make a lot of sense for Ten Hag.