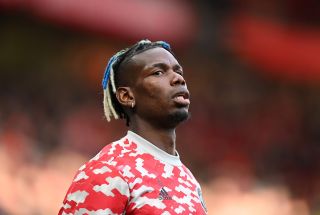 After several years of speculation, Paul Pogba’s departure from Manchester United has finally been confirmed and the 29-year-old will leave on a free transfer for the second time in a decade.

The former Juventus star is now believed to be closing in on a return to the Turin club and amid confirmation of his Old Trafford exit, we asked some of our readers to deliver their verdict on his six-year stay at United.

Started with promise, some great moments but not quite the level of player we needed on a consistent basis. Injuries and Mino were the complicating factor!

Our best player on his day, but because there were way too few of these days, the whole momentum of the team was affected.

Thanks for the memories,(can’t think of any) good riddance

I’ve seldom been as happy to see a player leave OT. An absolute parasite!!!

Pogba has cut a frustrating figure around the club for much of his six years at the club and the soap opera that comes with him has hardly helped United’s cause as they fought to resurrect the club.

In truth, Pogba’s presence has actively negated United’s efforts and although many of us were reluctant to accept it four years ago, perhaps Jose Mourinho was right in his assessment.