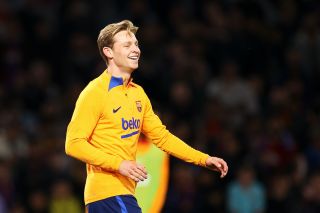 Although they worked together at Ajax before the midfielder’s 2019 transfer to Barcelona, but there is nothing to suggest that De Jong is keen on joining Manchester United this summer – apart from the fact he may choose to reunite with his former manager.

A figure of €85m has been mooted as potential transfer fee by reliable journalist Fabrizio Romano, who claims United have opened direct talks with Barcelona over a potential deal.

Romano states that the Netherlands international is still unsure about leaving Barcelona and he wants Champions League football, which is not something United can offer him next season after dropping back into the second-rate Europa League. It is understood that the Red Devils will try to push again, with the Spaniard club needing to solve their financial issues before registering new players this summer.

A critical report from Barcelona blog Barca Blaugranes states that “with each passing week the Dutchman’s level is dipping, and that really isn’t acceptable at this level,” so there is a good chance that the La Liga giants will cash in if they don’t think he suits Xavi’s preferred system.

Can De Jong get back to the player that helped drive Ajax to the Champions League semi-finals?